Introducing Live Three Card Poker - one of the hottest casino table games around. Puts your poker playing skills to the test against our live dealers. There are multiple winning combinations available in this game, and they begin with 3 of a kind. Payouts can be epic, as you form high-ranking hands. 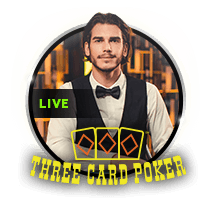 Three Card Poker is one of the most exciting casino table games and it’s available to you in a live dealer format. It’s quick and easy to learn, and you can enjoy it from the comforts of home, or on the go. Put your poker skills to the test as you go head-to-head against our dealers. Not only is it one of the easiest games to learn, it also allows you to put your poker skills to the test in real time. This game is played against 888 live casino dealers in real time. The size of your winnings depends on the strength of your hand, so ante up for some fun.

The objective is to form the best possible poker hand with just 3 cards. Seems simple enough right? You’re about to find out how challenging and entertaining Live 3 Card Poker can be. Luckily, you’re only competing against the dealer. You start by placing an Ante Bet, and if you like the look of your hands, you place an additional bet to play that hand against the dealer. It’s always a good idea to play hands better than a Queen, 6, and 4, and Fold everything else. Remember, once you fold, the hand’s over. The dealer collects your Ante bet and your Pair Plus bet if you fold. Luckily, that’s when a new hand begins.

To get started, the dealer requires a Queen high card. It is possible to enjoy payouts of 100:1 on a Pair or Better, meaning that there are plenty of great ways to win in Live Three Card Poker. To cap things off, there are Bonus Bets available to players, which can increase your payouts in a big way. These include the 6-Card Bet, the Pair Plus Bet, and the Ante Bet.

The game is played fast and furious. With a single deck comprising 52 cards which are shuffled after every hand is dealt. The 6-Card Bonus Bet requires players to compile the strongest 5-card poker hand with 3 cards + the dealer’s 3 cards. For example, Pair Plus Bonus Bets award payouts when you form a Pair or Better. The good news is it doesn’t matter what the dealer is holding. The Ante Bonus Bet awards players with big prizes when they form a straight or better, regardless of what the dealer has.

The 6 Card Bonus Bets offer generous payouts to players, such as:

A payout of 1:1 is offered on both the Ante Bet and the Play Bet. Note that malfunctions void all plays and pays in Live Three Card Poker.

Live Three Card Poker is one of the most successful casino card games in history. It’s easy to learn and offers generous payouts when you form ranking hands. The game is played with a standard 52 card deck, and the cards are shuffled after every round.

A Three Card Straight ranks higher than a Three Card Flush in Three Card Poker. Why? Because it’s more difficult to form a Straight than a Flush. Cards are always ranked in descending order. Aces can either be low or high, followed by King, Queen, Jack, 10, 9, 8, 7, 6, 5, 4, 3 & 2. In a Straight, Aces can have a low value with Ace, 2, 3, or they can have a high value with Queen, King, Ace.

When Players have the same type of hand as the Dealer, the hand with the card with the highest value will win. For example, Queen, Queen, Queentrumps Jack, Jack, Jack. A Flush comprising Queen, Jack, 10 always beats a Flush with 9, 8, 7. If the Player and the Dealer tie, it’s up to the Kicker – the next card that isn’t part of the paying hand, to determine who wins.

How to Form Winning Hands in Live Three Card Poker

What Winning Hands Are Possible with a 6 Card Bonus?

If a player places the 6 card bonus bet, you will be awarded the payout if your 3 cards plus the dealer’s 3 cards make up a winning 5-card poker hand of Three of a Kind or better.

We sent a Token to .
Please enter the last token you received to continue.

You have entered an invalid token, please try again

Did not receive the token? Resend token

New token was sent to your email. Resend token

Would you like us to send the code to your email address: %%mfa-email%% ?